From the farm gate to your taste buds: The story of how Pelwatte creates the sumptuous dairy spread

Transformation of Pelwatte Dairy’s plant to such a modern facility was a result of repeated investments made by its founder Chairman, Mr. Ariyaseela Wickremanayake. He believes the high quality milk production process and the plant’s overall operational excellence have helped Pelwatte Dairy to achieve a leading slot in Sri Lanka’s dairy production industry, with multiple industry and marketing awards.

Milk purchased from the farmers are assessed for their quality before fed to the production line. Any deterioration in the quality of raw milk during extraction, transportation or storage results in whole milk consignments being rejected at the Pelwatte processing plant. Pelwatte Dairy’s automated systems record details of milk volumes and their temperatures from each supplier. In the plant’s laboratory, the milk is also subjected to mandatory tests of its quality – Organoleptic, Chemical, Physical, Adulteration and Microbial tests. Milk Samples taken from bowsers arriving at PDIL (from collection centers) are sent for laboratory verifications where these tests are conducted. If the lab approves that the samples are compliant with above requirements, the milk will be unloaded after following some important steps-they are filtration, measurement of volume by flow meters, and chilling the milk to 4o C by PHE (Plate Heat Exchanger). Milk that has passed these quality tests are stored in Pelwatte Dairy’s storage tanks at temperature of 4°–6° C. It is then made ready for pasteurization where the milk is heated to standard temperatures and then cooled immediately destroying bacteria. Pelwatte Dairy uses modern milk pasteurization machines made in Denmark. The fat content is thereafter standardized from the milk using Centrifugal Cream Separators. Thus the milk passes through the Clarifier (which is made in Denmark), (Separator, made in Denmark). About 95% of such compliant milk (passed by the Pelwatte laboratory) is used for milk powder production (mostly Full Cream Milk Powder, then followed by Skimmed Milk Powder based on demand levels). The Indian made Dairy Spray Dryer at Pelwatte Dairy produces the Pelwatte milk powder.

A standardization process is adopted to balance the fat levels as per Milk Powder SLS standards. The extra fat removed at this stage will be used to produce Pelwatte Dairy’s butter, ghee, ice cream, frozen cream and chilled cream.

Pelwatte Dairy has three milk powder plants, each with the capacity to process 80,000 liters of milk per day at an hourly production rate of 550 Kg of full cream milk powder.  The Pelwatte dryers can produce 30 tons of powdered milk daily. Evaporation machine at Pelwatte which removes any water from the milk powder is made in India, and the plant uses the “Four effect falling film evaporators & two stage spray dryer” technology.  The resulting milk powder will be packed into 20kg bulk bags from which consumer packing (as 400g and 1kg packs) takes place thereafter using the Form-Fill-Seal type machinery. During the entire production process, rapid chemical, physical and microbial analysis are performed continuously to maintain the high quality of milk. During the process various other tests are also conducted to verify if the product maintains SLS and ISO standards in Pelwatte Dairy’s milk.

Each Powder Plant is equipped with its own Form-Fill-Seal plants for smaller sized packs. This process of evaporation does not take place when the milk is used for yoghurt production. Pasteurization is implemented by a Continuous Pasteurizer after which the Pelwatte yoghurt mix (in SLS and PDIL standards) are filled in to cups, and they are sealed, date printed, stacked in to boxes sent to an incubation room where it propagates the culture for the yoghurt ‘to set’. Thereafter it will be moved to the blast coolers which cools down the cups below 10OC within very short period of time. after which it is shifted to 4oC cold rooms. Pelwatte Dairy also uses SLS and PDIL standards to make the Pelwatte Ice Creams. Fresh milk and milk solids are used and pasteurization is implemented by a batch pasteurizer. This mix is subjected a unique aging process and a Filling Machine fills the cups at a rate of 5,000 liters per day. Once the cups are filled they are passed to a “hardening room” for freezing.

Pelwatte Butter is made from the cream generated by milk standardization process used for powder production. The cream is aged before production of butter starts. “Churners” are used to produce the butter (addition of salt takes place for Salted Butter). Currently around 1.2 – 1.5 Mt butter is produced daily.

As for production of Ghee, traditional evaporation techniques are used followed by a unique sedimentation process. Current production rate is around 500 kg per day. Fresh milk and milk solids are used to produce Pelwatte Drinking Yoghurt (made under SLS and PDIL standards). A “Batch Pasteurizer” implements the pasteurization.

The Drinking Yoghurt is kept at vats for incubation needed it to become the yoghurt and will be stirred and then it is filled to bottles. Fresh milk and milk solids are used to produce Pelwatte Curd, with SLS and PDIL standards. A batch pasteurizer performs pasteurization. Similar to Ice Cream making, the filled curd cups will be transferred to an incubation room to let the curd to be formed.

Having set up in 2006, Pelwatte Dairy, which specializes in milk processing, animal feed and dairy products is one of the Sri Lankan brands that successfully saves the outflow of foreign exchange for dairy product imports from abroad. The Company is ambitious to develop the dairy cattle husbandry in Sri Lanka with a view to establish a continuous and trustworthy flow of quality raw materials to the dairy industry. An ISO 22000:2018 certified Company, Pelwatte Dairy owns one of the most modern dairy factories (designed around Danish technology) that operates in Sri Lankan dairy sector at present. 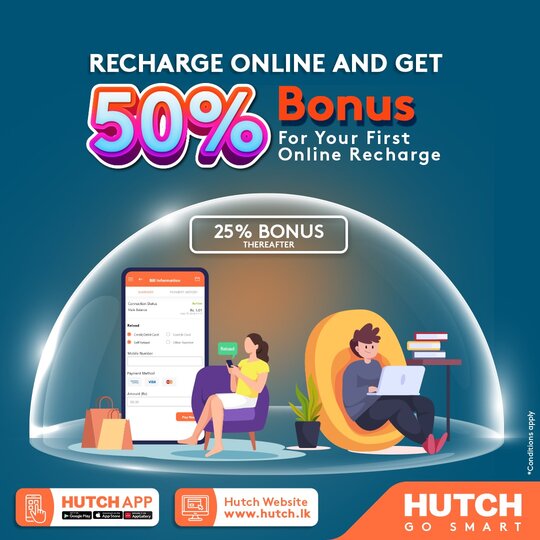 Recharge online with HUTCH and enjoy up to 50% bonus!