DIMO, a leading diversified conglomerate in Sri Lanka, with over 80 years of engineering excellence, recently introduced DI-Solar, a revolutionary solution, enabling the power generated through the existing solar PV systems to be utilized during the prevailing daytime power interruptions, thereby preventing the power wastage. This is Sri Lanka’s first and only cutting-edge solution in the market that allows the power generated by solar systems to be utilized without any mode of battery storage, which is ideal for the industries facing various challenges due to the power shortage in the country, as it facilitates uninterrupted business operations and reduces the spend on fuel for generators by 50% to 70%.

In addition to the heavy focus on the industrial usage, DI-Solar also comes with a consumer solution component, which will soon be introduced to the market, further accelerating nation’s green journey.

Industries in Sri Lanka are facing many challenges in pursuit of seamlessly continuing their business operations during the regular power cuts, without incurring production losses and downtime. Although many business enterprises are having pre-installed rooftop solar PV systems, they are unable to use the power generated through the solar PV systems during power outages at daytime, as the grid is not available. Thus, they are compelled to entirely depend on generators, to continue operations at a time when fuel incurs a high cost.

The continuous offering of innovative solutions to address the issues of the country’s power sector is a testament to DIMO’s vast expertise in the power and energy sector.

DI-Solar offers, a high-tech controller from a leading manufacturer in Europe that would be installed on new or existing solar PV systems and whenever there is a daytime power interruption, it enables the premises to operate as an off-grid system and utilize the power generated through the solar PV system to cater to the internal requirement, which otherwise would have been wasted.

When power interruptions occur during the daytime, the generators will start producing electricity to serve the electricity demand in the premises. In the next instance, the proposed controller comes into operation by using the parameters in the electricity generated by the generator to trigger solar PV inverters to be switched on. The solar PV inverters will then commence its process of generating electricity and become the primary energy source to cater the load, while reducing the electricity generation by generators, resulting in a reduction of fuel consumption. Moreover, this solution can be further improved to use even during the night-time power interruptions by integrating a battery.  DI-Solar can be customised according to any existing solar PV system and the company also offers solar PV systems with this solution for the industrialists who do not possess pre-installed solar PV systems to power their plants.

Mr. Ranjith Pandithage, Chairman & Managing Director of DIMO said, “This project is yet another timely offering by DIMO and we continue to fuel the dreams and aspirations of the communities we serve in, providing the nation the means to switch to renewable energy solutions, which in the current context is extremely important.”

If installed at a facility with an approximate solar PV system capacity of 650kW and experiences an average 3–4-hour daytime power interruption, during which generators are used to cater the demand, the DI-Solar system has a capability to drastically reduce the fuel consumption, as it only requires fuel to cater for the minimum load of the generator (around 30% of the generator capacity). The rest of the energy requirement of the generators (the balance 70%) will be attained by utilizing solar energy generated through the solar PV panels. Accordingly, the business enterprise will also reduce its expenditure on fuel and enjoy a swift payback period of 1-2 years.

DI-Solar also allows industries to use renewable energy without totally depending on the national grid, as a proactive measure in facing any future challenges in the local power sector while also allowing them to contribute more to the national GDP output through uninterrupted operations and reducing the foreign spend on fuel imports.

Diesel & Motor Engineering PLC (DIMO) is involved in a number of related fields and represents many prestigious principals – Mercedes-Benz, Siemens, Jeep, KSB, TATA Motors, MTU, Komatsu, Michelin, Zeiss, MRF, Bomag, Claas, TK Elevator, Mahindra Tractors and Stanley to name a few. From a company known for vehicles, DIMO today has diversified into many areas. Medical Engineering, Building Management Systems and Services, Power Generation and Distribution, Material Handling, Storage and Warehouse solutions, Power Tools, Agricultural Equipment, Total Lighting Solutions, Power systems and Generators, Refrigeration, Ship Repairing and Driver Training Courses are some of the areas into which DIMO has entered during the past few decades. DIMO has also diversified into fertilizer and agriculture input market. DIMO successfully entered into overseas markets in the Maldives and Myanmar, by expanding their Marine and General Engineering services through partnerships in the Maldives and their automobiles and automobile servicing segments into Myanmar. DIMO is currently working to consolidate on current overseas operations with new markets in East Africa. 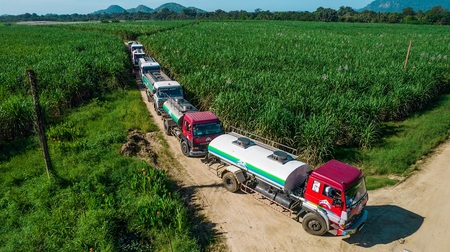 From the farm gate to your taste buds: The story of how Pelwatte creates the sumptuous dairy spread